Home > Data Recovery > Is It Possible to Add a SSD to HDD RAID 0?

Is It Possible to Add a SSD to HDD RAID 0?

Solid state drive (SSD) works much faster than traditional hard disk drive (HDD). So as to achieve greater performance in RAID 0, which is set up with HDDs, some users wish to add a SSD to such RAID system. But is it possible and right? This post will delve into this issue.

As we all know, solid state drive (SSD) is a type of drive which is entirely different from mechanical hard disk drive (HDD), no matter in operating principles, drive components and so on. Due to the fact that SSD works much faster than HDD, lots of users hope to add a SSD to RAID 0 that is set up with HDD, desiring to use SSD as the boot drive and HDDs in the array for data storage. 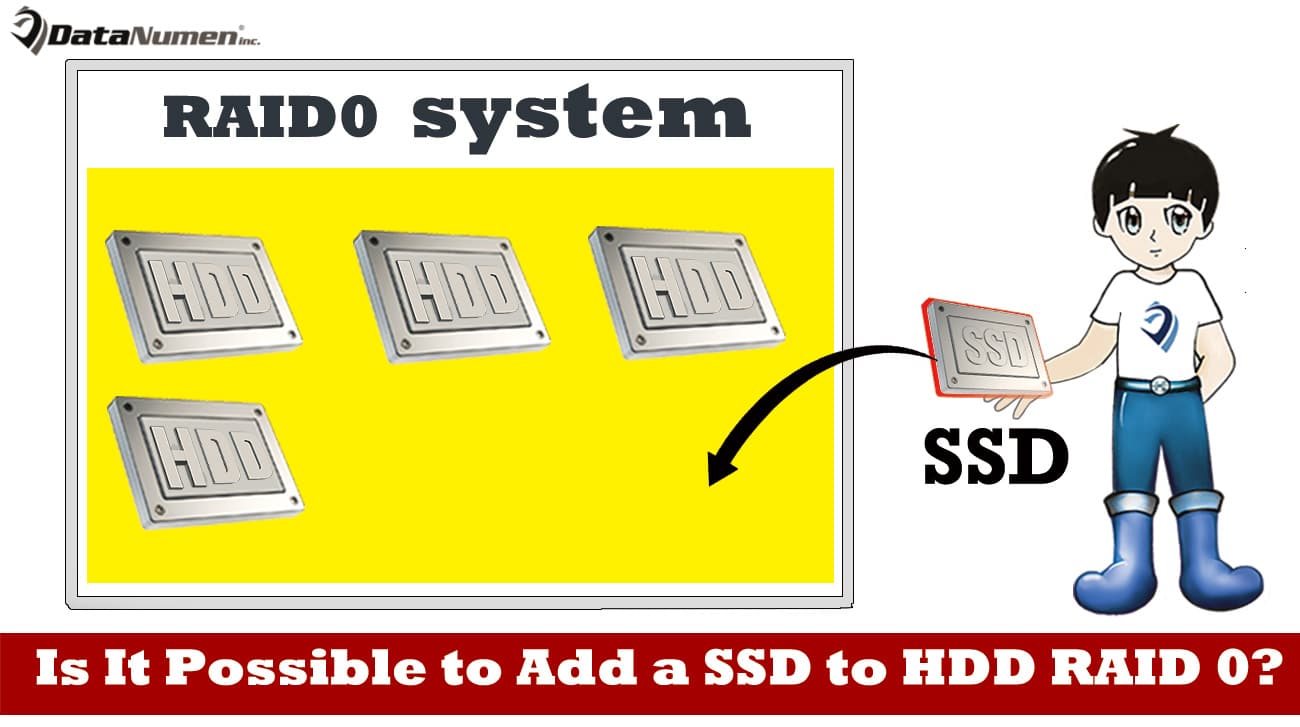 Nevertheless, is it okay to do this? Will adding SSD to HDD RAID 0 cause data loss or data corruption such as corrupt Outlook file? Many users are confused about it. Now, thereinafter, we will discuss about this question in detail.

RAID 0 requires an even number of drives in the array. Most users choose to use two drives. It will scatter data cross drive equally, namely splitting/striping data evenly across drives. In this way, it doesn’t offer fault tolerance or redundancy. It means that when one drive fails, the entire array will crash. However, RAID 0 will indeed help you achieve fairly fast performance. This is its key advantage.

Use Same Type of Drives

To be honest, you will not benefit from adding a solid state drive to HDD RAID 0. It is always suggested to utilize the same type of drives in one RAID system. They should be in the same architecture. Otherwise, the array will be pretty unstable and more prone to fail.

In addition, RAID controller plays a greatly important role in RAID function. It is responsible for managing all the drives in the array. Therefore, if you would like to add a SSD to a HDD RAID 0, you should consider the controller’s capacity. If it has exceeds what the controller can bear, imposing a SSD will destroy the array.

If you intend to add a SSD just for additional storage space, you’d better dismiss this idea as well. It is because that the total capacity of a RAID 0 array is based on the drive with the smallest capacity in the array. For example, if your RAID 0 has two drives of 110 GB and 240 GB, the actual capacity of the RAID 0 is only 110 GB times two, namely 220 GB.

Furthermore, like the storage capacity, the read/write speed of a RAID 0 is also dependent on the drive with the slowest speed in the array. Therefore, even if you add a SSD to HDD RAID 0, your RAID 0 will still work in the same speed as HDD, instead of the newly added SSD.

Based on all mentioned above, you cannot benefit a lot from adding a SSD to HDD RAID 0. Hence, please dismiss such ideas at once! If you long for SSD’s speed and HDD’s storage at the same time, why not select a hybrid hard drive (HHD)?

Shirley Zhang is a data recovery expert in DataNumen, Inc., which is the world leader in data recovery technologies, including mdf recovery and outlook repair software products. For more information visit www.datanumen.com

One response to “Is It Possible to Add a SSD to HDD RAID 0?”