Explore the Features of Mobile Report Publisher in SQL Server

Know more about the Mobile Report Publisher in SQL and its features.

It was obvious that SQL couldn’t overlook the economic value of mobile phones as they were seen as revolutionary sources of information. The growth of mobile outpaced the development of computers, but there were challenged with mobiles. Due to various platforms of mobile devices such as iOS, Windows, Android, etc. and mobile’s smaller display it became difficult to report data effectively. SQL Server however worked on mobile phone versions and introduced Mobile Report Publisher which allowed users to develop and formulate reports on mobile devices across different platforms. 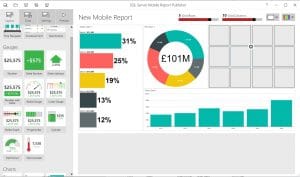 In mobile reporting, visual analytical aspects were given priority because detailed textual data would make little sense on smaller screens. In 2016, SQL Server reporting services introduces a new Publisher for reporting, which could develop reports for mobiles and tablets and desktops.

The SQL Server Mobile Report Publisher is a tool which might look familiar to Datazen, which Microsoft purchased in 2015. The services features built in Simulators which are useful in testing reports for different layouts.

The problem that arose because of different platforms was also resolved. They could now support iOS and later, Windows 10 and Android 4.4 and above versions. However users would still require mobile Power BI applications to run reports on mobile devices.

Mobile Report Publisher in SQL server is also a mobile report authoring tool which provides better features and visualization to prepare mobile reports. Users have the option to take data from MS Excel spreadsheets or from Dataset on SSRS web portals.

Reports are basically classified as Operational, Analytical and Strategic. For mobile devices, usually strategic reports are used. There are also 5 major controls that you could add for better results which are Dashboard, maps, Gauges, maps, data grids and charts. A dashboard is a type of report which contains aggregated data from a range of data visualization components.

Another great feature to notice is Parameters. It provides scope and various filters which easily sorts out the data and present only the desired content instead of fully detailed version.

It’s important to understand the visualization challenges in mobile reporting. Due to smaller interface, visualizations had to be different from the conventional desktop view. To better visualize the data on mobile devices, users have a range of formatting options. Most common are data grids. Additionally, Mobile Report Publisher also provides visualizing options such as Charts, Gauges, Navigators and Maps. Data grids have the features of adding charts and gauges in the working area. Charts are very important visual tools, and with the addition of Pie and Funnel charts which makes data analysis easier and conventional, Mobile report Publisher has hit the nail. There are also various totals and Comparison Totals chart, Category charts, time line charts, etc.

The apps by SQL are open for all platforms. It allows the user to authenticate directly with SSRS server and can connect Power BI Dashboards. After the integration is completed, users can directly pin SSRS data reports on PowerBI boards.

If you ever encounter a SQL crash, then all your data including custom reports can come at risk. To avoid any chances of data loss, invest in a recovery tool to repair SQL Server.

Victor Simon is a data recovery expert in DataNumen, Inc., which is the world leader in data recovery technologies, including fix Access and sql recovery software products. For more information visit https://www.datanumen.com/