Home > Data Recovery > How Often Should You Defrag a Hard Drive?

How Often Should You Defrag a Hard Drive? 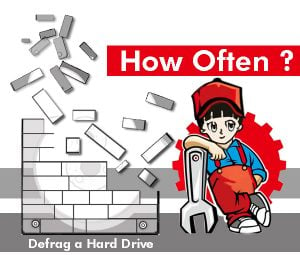 Generally, over times, the files on your hard drive will surely become fragmented. In this case, the drive will slow down greatly as it has to check multiple places for file pieces when trying to access a file, which will take a pretty long time. Hence, in this scenario, the most effective solution is to defrag the hard drive, which will organize the files so that the drive heads will be able to access them faster. Thus, it is always recommended to defrag a hard drive at regular intervals. About this suggestion, many users are confused about how often to defrag a drive is right. If you have the same question, read on. Here we’ll offer some helpful advices.

How Often Depends on Several Things

If your computer is running on Windows XP or Windows Vista, it is suggested to defrag the internal hard drive once a week. You should manually schedule such a task in your Windows Task Scheduler. However, if your PC works on Windows 7 and newer versions, you don’t need to schedule such a task in that there’s already a weekly task to defrag the hard drives on your computer.

Weekly defragment is suggested for common regular users. Yet, if you always use your computer quite heavily, such as frequently creating or deleting a lot of files on a daily basis, defragging the drive weekly may be not enough. You may require a much more frequent defragment, such as nightly defrag.

There are some special files which are excluded in defragment task. They’re page files, hibernation files as well as system registry files, which are usually locked and always in use. As a matter of fact, you can simply leave them aside. Nevertheless, if you do hope to defrag them, you do not need to do that as often as the regular files. You can defrag such special files just once or twice a year.

All advices mentioned above are only suitable for hard disk drive (HDD), namely the traditional mechanical drives. You shouldn’t apply them to solid state drive (SSD). In fact, you should never defrag a SSD. Defragment will never improve the performance of SSD. And even it’ll accelerate the degradation of SSD, shortening its life span. Once the SSD fails thoroughly, you will lose the data stored in it. At that time, data recovery, like PST recovery, will be considerably difficult and even impossible.