Hard Drive vs Memory: Different Roles in Your Computer

Many users are confused about the hard drive and memory in computer. Therefore, in this article, we will delve into the differences of the two components to help you learn them.

Since “memory” is also a word meaning storage, many users cannot distinguish it from hard drive. As a matter of fact, they are two totally different components in computer. They are different not only in the roles but also in how they function. If your computer performs strangely slowly, you may suspect whether hard drive is out of space. But when checking, you may find that there are a lot of drive space left. In this scenario, most of time, the lack of memory is the real culprit. Are you still puzzled about them? If so, please read on. Here we’ll help you to know them in detail. 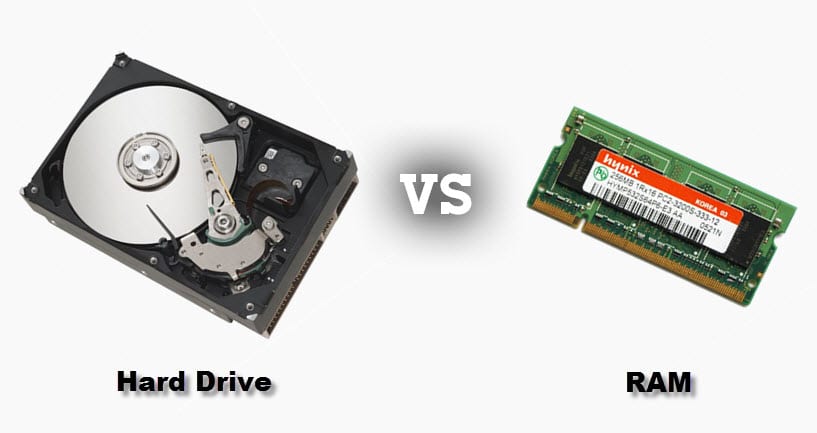 Hard drive is where all of your computer data is stored, namely the repository of data. To be specific, your computer operating system, programs and all kinds of data such as common Word documents, PST files and videos reside on your hard drive. The larger your hard drive storage capacity, the more data you can store in it. Besides, if hard drive gets damaged, all of your data will be corrupt, too, like corrupt PST files, compromised Word documents and inaccessible apps, etc. In a nutshell, hard drive plays a role in data storage.

So-called “memory” actually refers to Random Access Memory (RAM). It is also a crucial computer component involving storage space. Unlike hard drive, memory plays the role in computer’s performance, such as system speed and stability. It is because that PC can access data in RAM much more rapidly than data in drive. So, for instance, when you launch a program, the computer will transfer some of its data to the RAM for faster and easier access. The more tasks running at the same time or the more resource-intensive programs are working, the more memory in PC will be demanded. Once the memory tends to run out, you will experience the obviously slow PC performance.

Perhaps you have ever heard virtual memory, which is a smart trick to combine RAM and some of hard drive space. Windows maintains a “paging file” in the hard drive, which takes up a few GB of drive space. When computer RAM runs out due to too many programs running meanwhile, “paging file” will be used as memory, thereby keeping the PC to run as normal instead of too slowly.