When a hard drive fails in redundant array of independent disks (RAID), you’ll need to perform RAID rebuild. But, before rebuild, you’d better make some preparation. This article will tell you 5 vital preparation steps in detail.

The redundant array of independent disks (RAID) is a popular and advanced data storage technology in the contemporary era. Via it, you are capable of connecting two or more hard drives in a single storage system with utmost ease. In this case, your system will be able to work much faster and you will achieve fault tolerance as well as data redundancy. In a nutshell, you can benefit from it greatly.

Nevertheless, it does not mean that RAID is flawless. Its internal hard drives can fail as usual. Also, for common RAID levels, such as RAID 5, when a hard drive has failed, if one more drive fails at this point, the RAID will crash totally. Hence, once a hard drive fails, you should begin to plan RAID rebuild immediately, preventing data loss. Successful RAID rebuild is able to get RAID system back to function as normal. But, in prior to rebuild, you had better take the following 5 preparation steps. 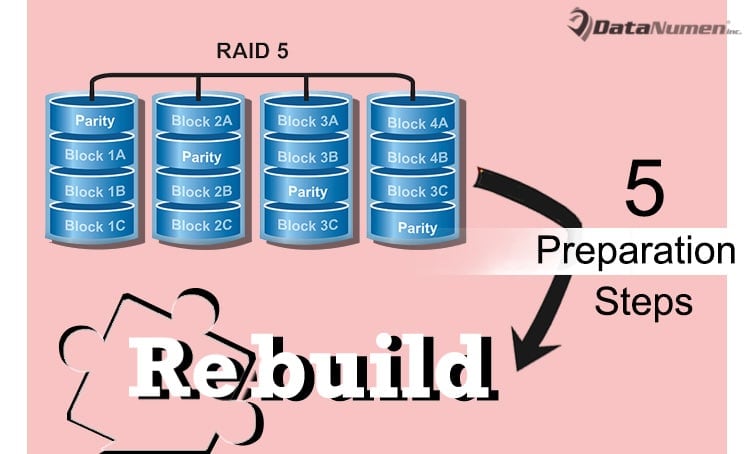 First of all, you should insure that you have kept latest backups for all data store in RAID system. Up-to-date and effective data backups can prevent data loss due to rebuild failure. For instance, even if rebuild fails, your data in RAID will tend to be corrupted, such as corrupt Outlook file. However, if you’ve kept backups, you don’t need to panic.

2. Get a Compatible Spare Hard Drive

Without any doubts, RAID rebuild requires a spare hard drive. Hence, you need to get such one. You can easily procure a hard drive no matter through online shop or nearby retailer. You need to ensure that it’s compatible with your RAID system. For instance, it should be in same conditions and model as the other hard drives.

After getting such a spare hard drive, to be doubly sure, you’re better off checking it via specialized diagnostic check tool once again. It aims to ensure that the hard drive is good, can work normally and is fully fit to be installed into your RAID.

In addition, RAID controller is responsible for controlling and organizing all hard drives in the array. Therefore, before RAID rebuild, you have to test the controller as well. You ought to insure that it is good, not malfunctioning. Otherwise, a bad RAID controller will destroy the chances for successful RAID rebuild.

Last but not least, you have to make sure that RAID system is powered off during rebuild. As you know, you need to install a new hard drive into the system. If it is powered on and keeps working, the drive installation must be pretty risky. It can expose your hard drive to file system corruption. Thereby, turn off the system!